It is interesting to reflect on the similarities and differences of “The Twenties” 100 years ago and now.  The most obvious  parallel being the 1918 global pandemic. Post-war and at the start of an industrial revolution, the desire to have fun was high on many people’s agenda.

After two years of lockdowns and isolation, in the  middle of a technological revolution and with war in Europe, it’s interesting to see how society reacts now.

The most glaring difference being the tech – I’m not sure how Mrs Granville would have felt about our first read-through all being on devices!

I wanted to choose this show after being apart so much to re-instil that sense of fun and freedom, though even that has brought it’s own interesting challenges, I think many have found it hard to express themselves physically without technology again.

But “by jove” we’re going to have fun this weekend! And we hope you do too. Enjoy the show!

Come and celebrate the Roaring Twenties with madcap Flapper Polly Pepper and her friends!
(& a few of her adversaries!)

Polly is about to turn 18 and inherit “The Ice Garden” necklace, but with gangsters and mobsters and just about everyone else out to try and swipe it, it looks like the birthday party is doomed before it’s begun. Meanwhile, Augusta Granville, Polly’s Aunt who is hosting the party, doesn’t know if she’s coming or going or mahjonging with the rather-too-friendly Duke & Duchess advising her on the stock market.

On the other side of town, Mona Schlumpgarden is trying to keep the Crazy Cat Nite Club jumping, but with radio personalities trying to steal her acts and Lieutenant Fluke on her back, she might just have to come up with another plan. Luckily there’s a few handy “violinists” hanging around that might just be able to help her.

With Flagpole Sitters, Ziegfeld Follies, news reporters and new fella Buck Wayne on the scene, it looks like Polly has her hands full, but nothing can deter her from a Charleston, a sparkling glass of Polar Bear Ginger Ale and saving the day! It’s all just the cat’s meow.

Alcohol was prohibited in the 1920’s, it’s not anymore so please join us at the bar!!

Scene 4 – A new visitor at the Granville Estate

Scene 5 – Bringing you the latest news!

Scene 1 – The Follies at the Ziegfeld Theatre

It Has to be Jazz

Scene 2 – Another broadcast from Radio WWWW

There’s Life in the Old Gal Yet

Scene 6 – The Crazy Cat is closed

Scene 7 – More of the latest news

At the Granville Residence

At the Crazy Cat

We were so sad last year that the Minis group didn’t get to show themselves off as playing cards more than once as it was a big role for them and they had worked so hard on their characters. But we are very much looking forward to seeing them strut their stuff as news reporters this year.

Thank you so much too to all the chaperones, trustees and those helping on the bar & front of house, we couldn’t do it without you! 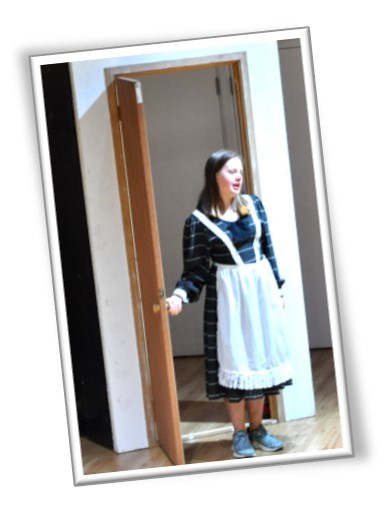 Thank you so much too to all the chaperones, trustees and those helping on the bar & front of house, we couldn’t do it without you!

The show that was, then wasn’t, then was again but then didn’t quite make it  in the end!

Take your grades in Acting

Much like graded music exams, we work towards grades to hone acting skills, which are marked against certain criteria (technique, interpretation, knowledge).

Small groups have online sessions once a week working towards individual performance pieces that are examined in the Spring. We also have some in-person weekend rehearsals.

We work on developing in-depth characters through analysis and improvisations, as well as honing artistic skills such as diction & communication.  It’s all about an individuals acting with no reliance on scenery, costumes, props, etc.

Extra! Extra! Read all about it!

The time has come to expand a little as we don’t want the groups getting too big and our personal-touch to get diluted. So we’re excited to be starting a new session time from September.