The touring arm of Gobo is currently having a little nap while we try to secure more funding, but we’ll update as soon as it’s all awakened again. Meanwhile, here are some details of our past productions and some of the young people we’ve worked with and helped get a foot up. 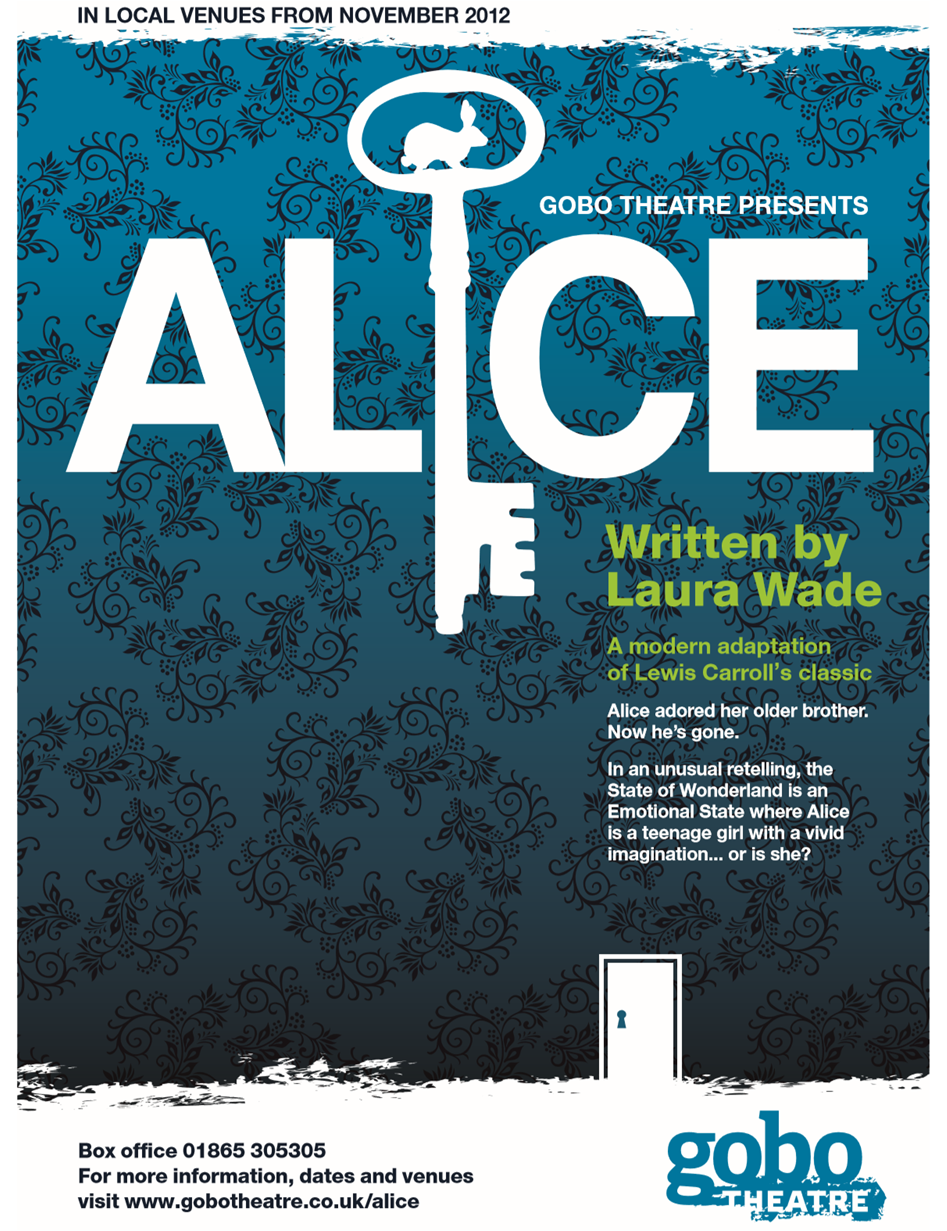 Coinciding with the 150th anniversary of the first telling of Lewis Carroll’s Alice’s Adventures in Wonderland, Alice, by the award-winning playwright Laura Wade, is a dark and feisty adaptation of the classic tale.

This sees a very modern Alice escape into a topsy-turvy world of wonderment in order to break away from her brother’s funeral. But in Gobo Theatre’s Alice the White Rabbit is still late for the Duchess, the Cheshire Cat retains his fixed grin, and the Hatter is, thankfully, still really quite mad! 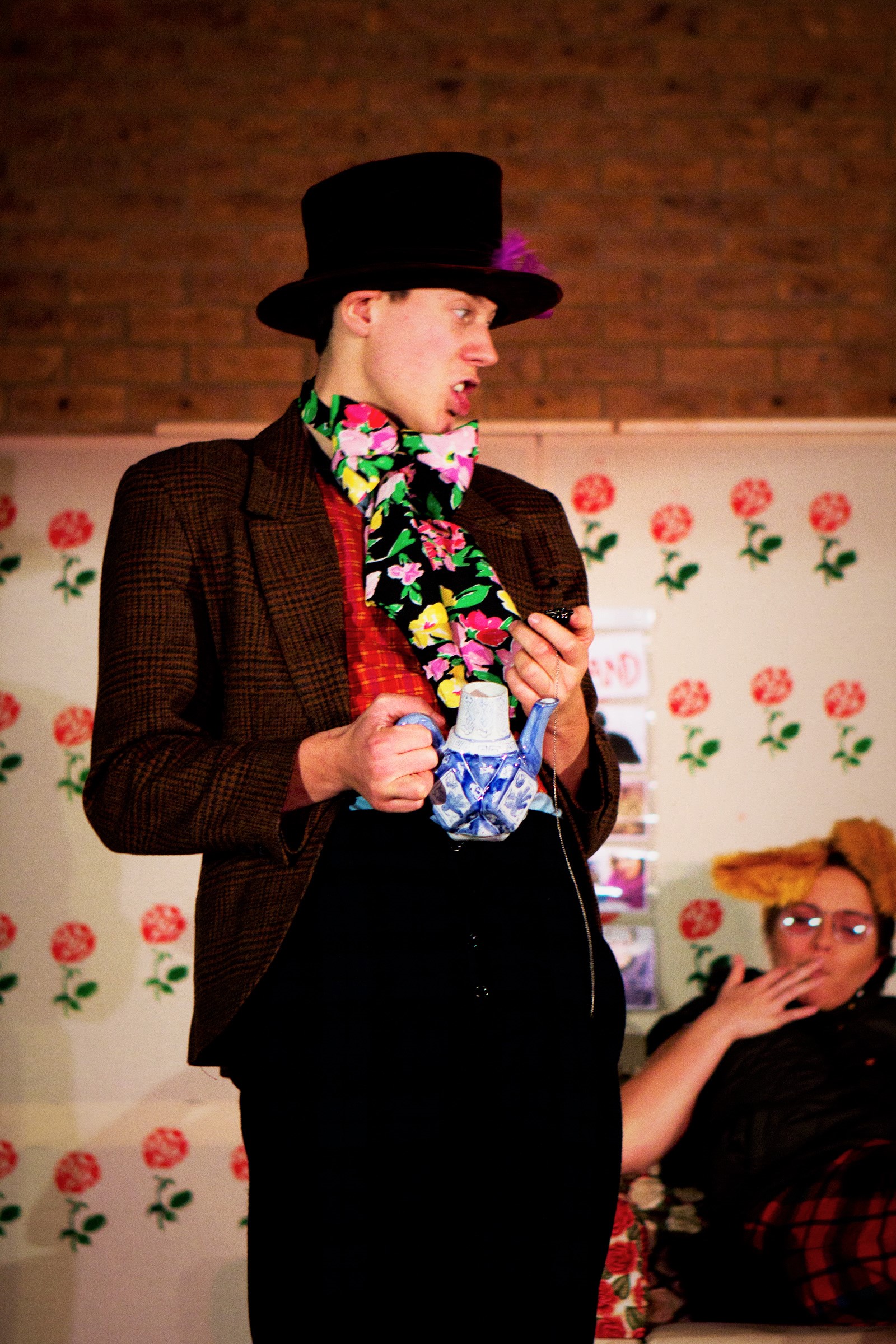 What audiences said about Alice:

It was a pleasure to visit Gobo Theatre at the Drill Hall — a new company creating opportunities for young performers to begin paid work in the theatre industry. They may be short on cash but they have passion and enthusiasm by the bucketful”

“A cast of five playing 30 odd characters required fancy footwork — but they managed admirably. Director Amy Standish’s staging is clear and concise, each character clearly delineated. For instance, Adam Elliott was outstanding as the Mad Hatter, but was also a great King of Hearts. When he pairs up with Dean Lamb for Tweedledum and Tweedledee they were hilarious and touching. Dean Lamb was also the most bonkers Duchess I have seen and Suzy Nutt’s Mock Turtle the weirdest. All were funny but still captured the essential pathos. The chemistry between the White Rabbit and Alice (Reece Miller and Emmy Owen) was moving. It’s exciting to see talented youngsters at the beginning of their careers. I recommend you visit Alice’s world.” 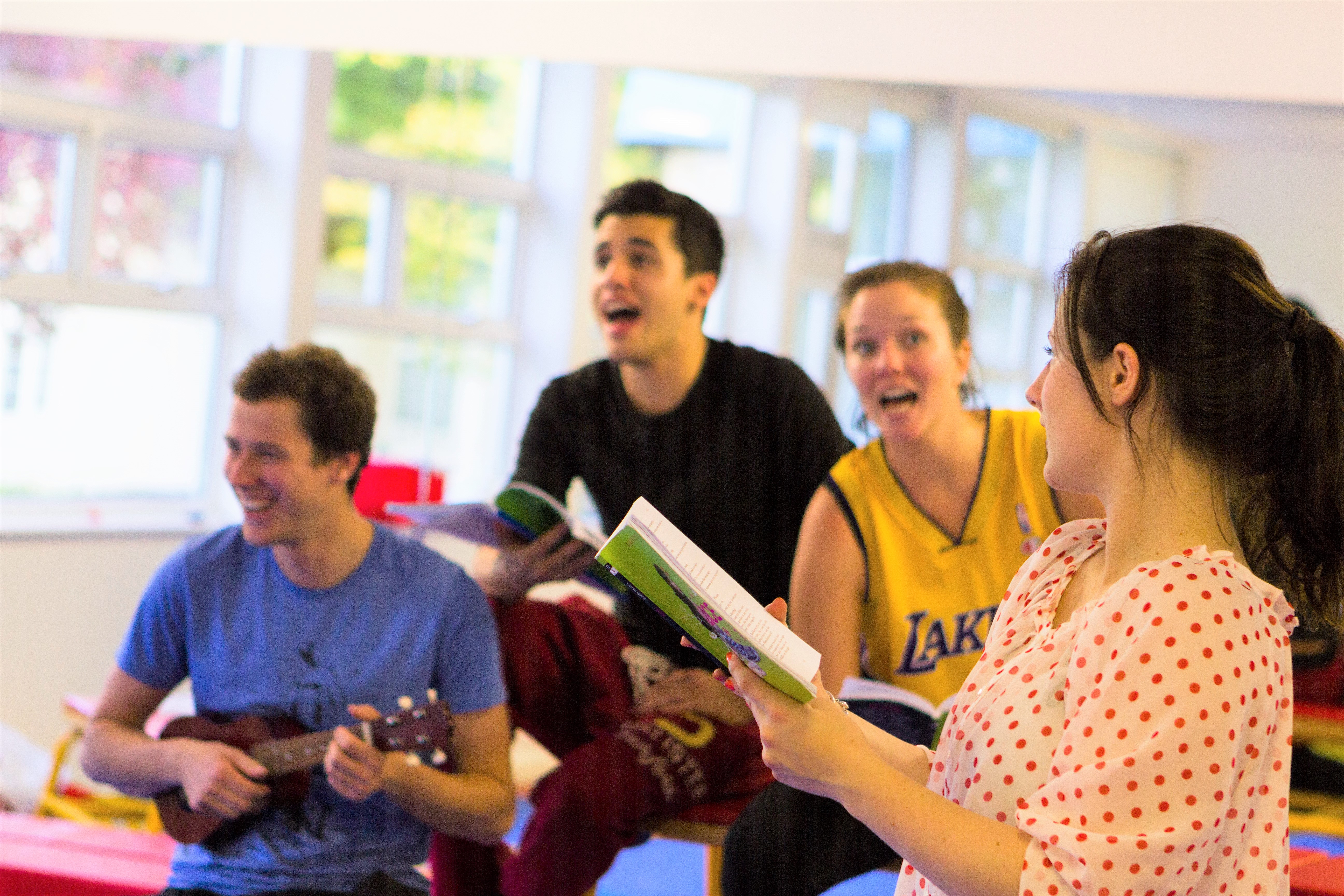 Alice constitutes the first ever professional acting job each of the five young stars has had, but they survived a rigorous audition process to get it, and there is absolutely no air of amateur dramatics to be detected in the slick and polished performances they put in. The Alice character has, historically, had a tendency to annoy me with her constant passive confusion and slowness to catch on, but Emmy Owen‘s Alice was refreshingly self-assured and feisty. The stand out performance came from Dean Lamb, who delivered a dazzling array of comic turns including a perfectly bipolar duchess. All the young stars offered an impressive array of accents and characters as they whizzed through numerous costume changes to act a thirty one- character play between the four of them.

Alice was side-splittingly funny as well as chokingly touching, and achieved a delicate balance between surreal humour and realist expression with some outstanding comic performances.

So why not banish the winter blues by going to see this hearty romp through Lewis Carrol’s best loved adventure. You are likely to laugh till you cry, and then cry as you reflect on what really matters in life. Add in the fact that you’ll be supporting young performers in the arts in the process, and who could argue with that?” 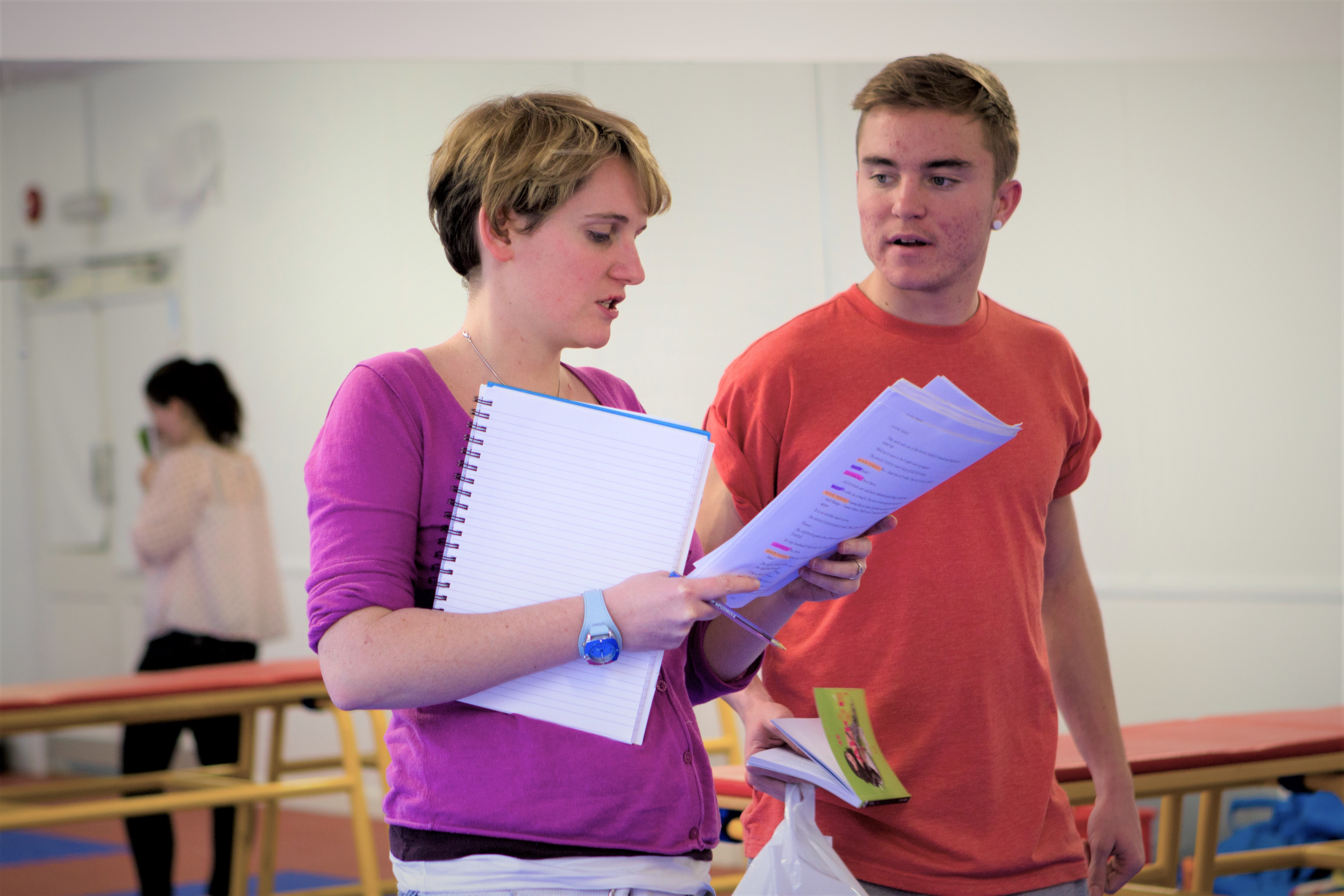 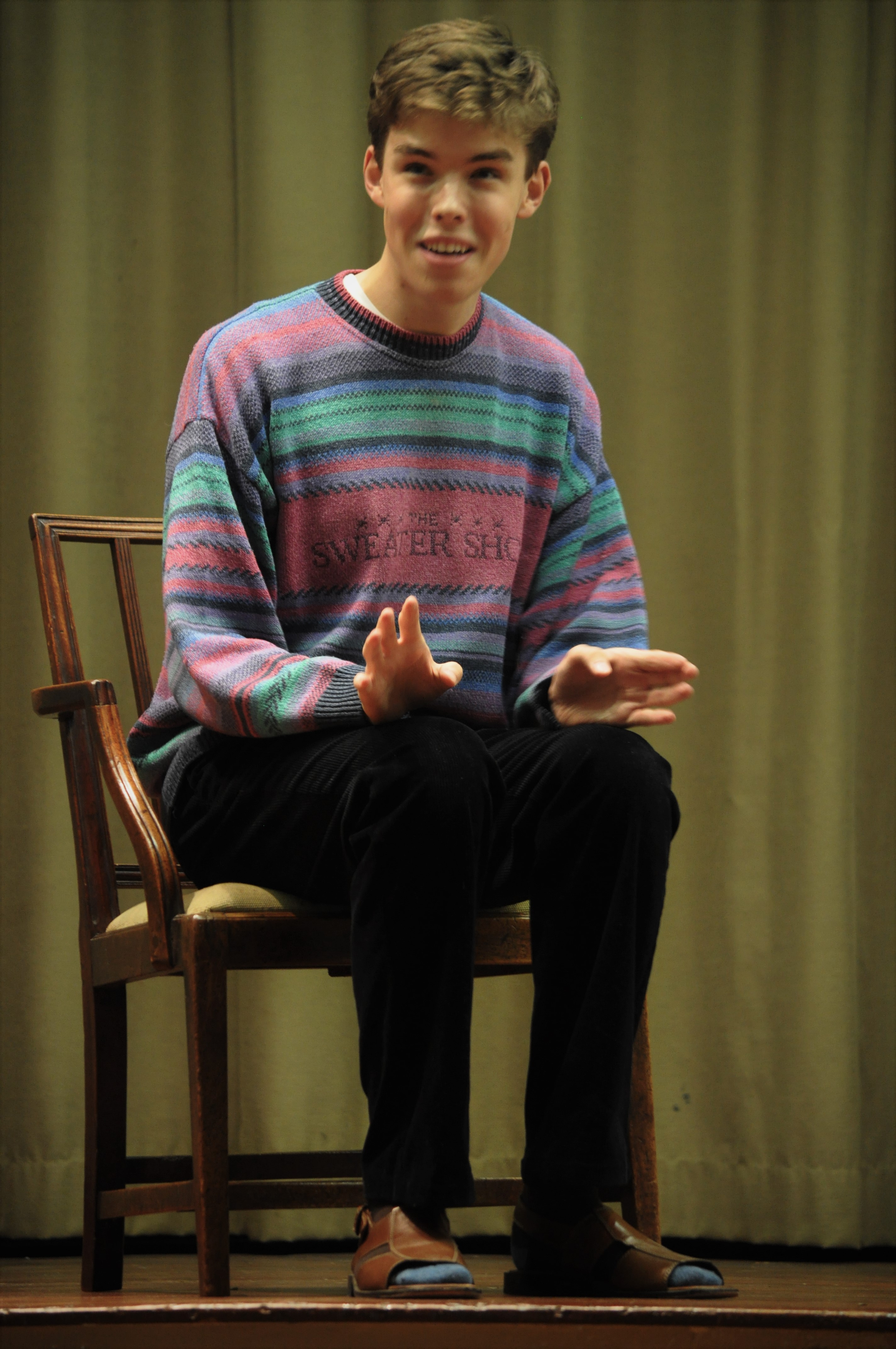 Her Big Chance, A Chip in the Sugar and A Bed Among the Lentils as performed by Gobo’s talented young people. Sadly only a fundraising one-nighter, because the cast were amazing and it deserved to be on tour!

I’ve worked with a great many young actors in my 30 year comedy career and I’ve long admired the skill, tenacity and courage they display in their determination to succeed in that incredibly competitive field. As a result I applaud any organisation which aims to help young actors get started. Such an organisation is Gobo and I am delighted to support it. I recently attended a performance of Talking Heads which was excellent and clearly demonstrated the sort of talent they are developing.” Paul Mayhew-Archer, BBC producer, writer and script-editor (best known for such shows as The Vicar of Dibley, Old Harry’s Game & My Hero) 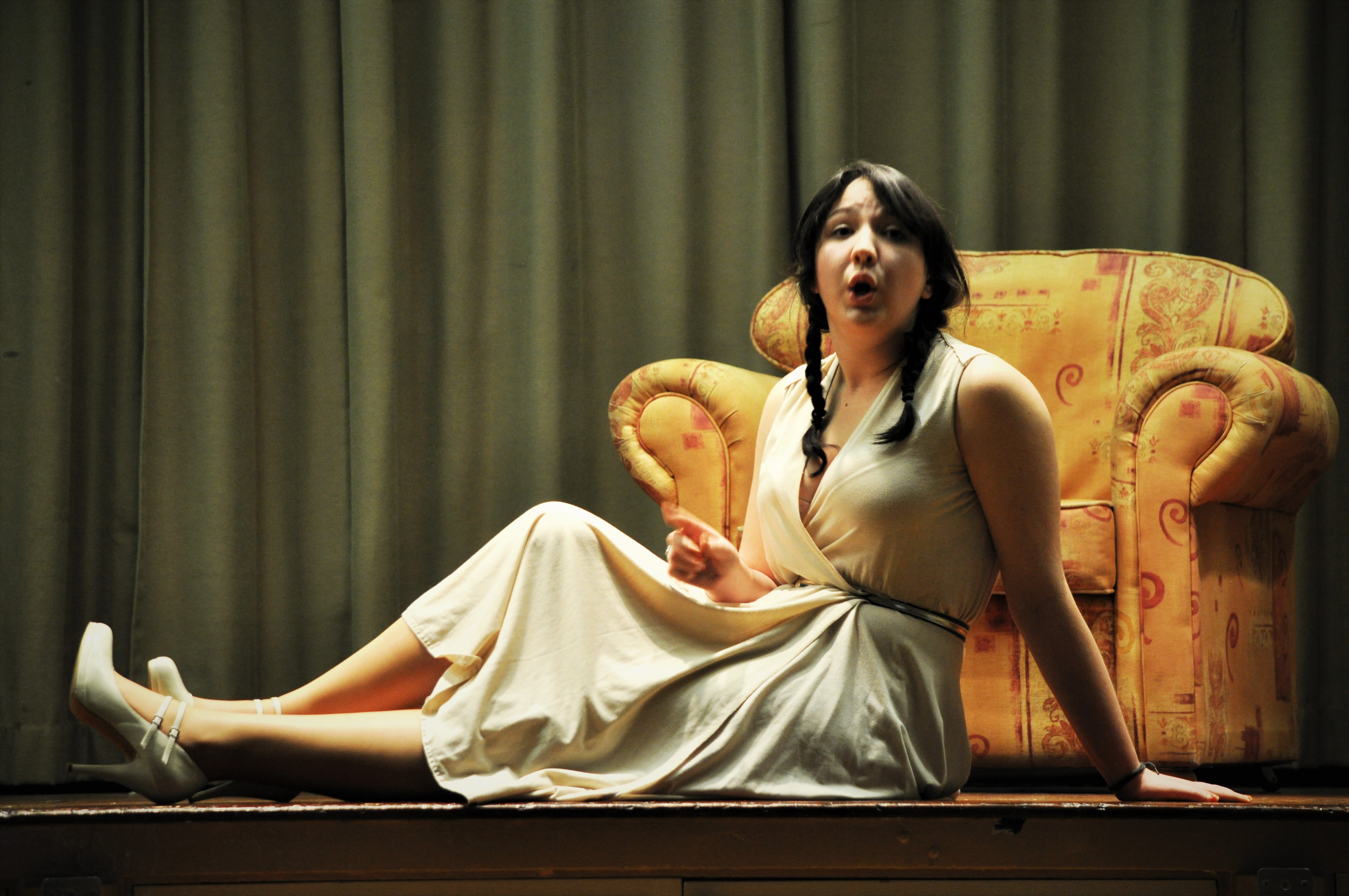 Amy challenged me intellectually and creatively and always encouraged me to push myself in order for me to reach my full potential. I have learned many skills from her teaching that I have put to use in my burgeoning acting career, such as auditioning for drama schools and acting courses. I am currently studying at the American Academy of Dramatic Arts in New York and I know that her teaching helped me to achieve the position I am currently in. When I return to the UK as a young professional actor I would love the opportunity to work with her again, because I think her work with young actors is important in their development and in the artistic enrichment of our society.” Alex Hopwood, 19 (Graham)

Join Gail, Hobby and Salty who, through their end of term play, tell the hilarious story of an idealistic new teacher in his perilous first days inside a local comprehensive school. Drama teacher Nixon connects with his uninterested, unruly  pupils and becomes a massively positive influence in their lives. Fresh out of college, Mr Nixon – passionate about teaching and full of ideals – comes face to face with the harsh reality of teaching in a rough comprehensive school. The play shows him become increasingly ground down by pupils’ bad behaviour, cover shifts, poor facilities and scorn for his subject. Eventually he crumbles and applies for a job in the neighbouring grammar school, seduced by its respectful students and state of the art drama studio. Three actors play around 30 roles in this face-paced, high energy, yet poignant piece. 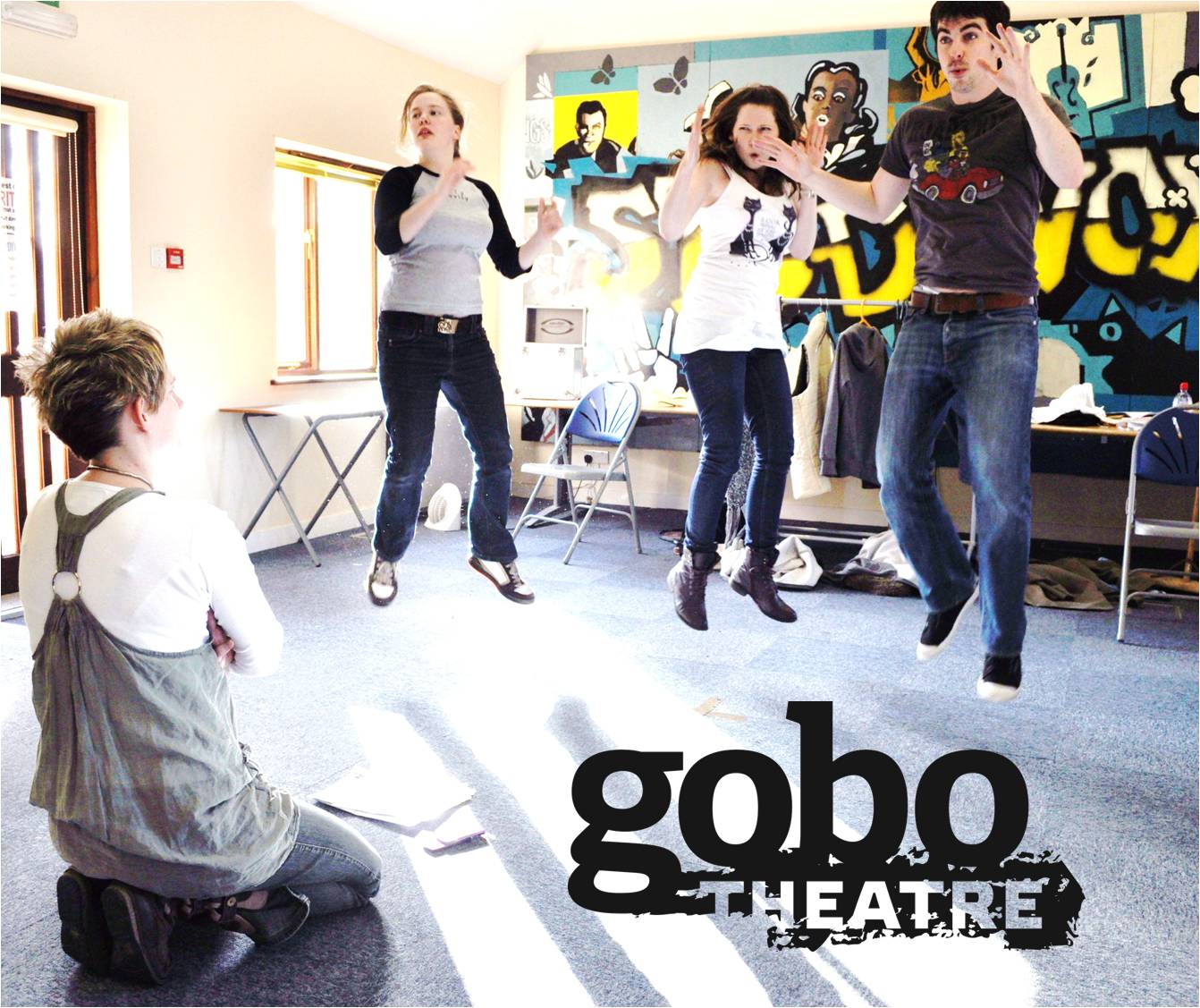 An audience of approximately eighty people were delighted by this play at Basildon ViIlage Hall. The three young actors were excellent. They were masters of their trade; their exchanges were word perfect, very slick and so amusing. They changed from one character to the next by altering an expression, a jacket, or a toss of their head – it was mesmerising to watch and their dialogue was so amusing. This energetic young cast with their ability to switch roles so effortlessly kept the audience enthralled.

Working as a teacher for 32 years I could recognise the characterisation of the many pupils and staff alike; I have taught pupils like these and worked alongside staff such as these too. This play is a true portrayal of “comprehensive” school life but told with love and respect for the pupils and staff alike; it is not cruel and cutting but witty, fast moving and accurate.” 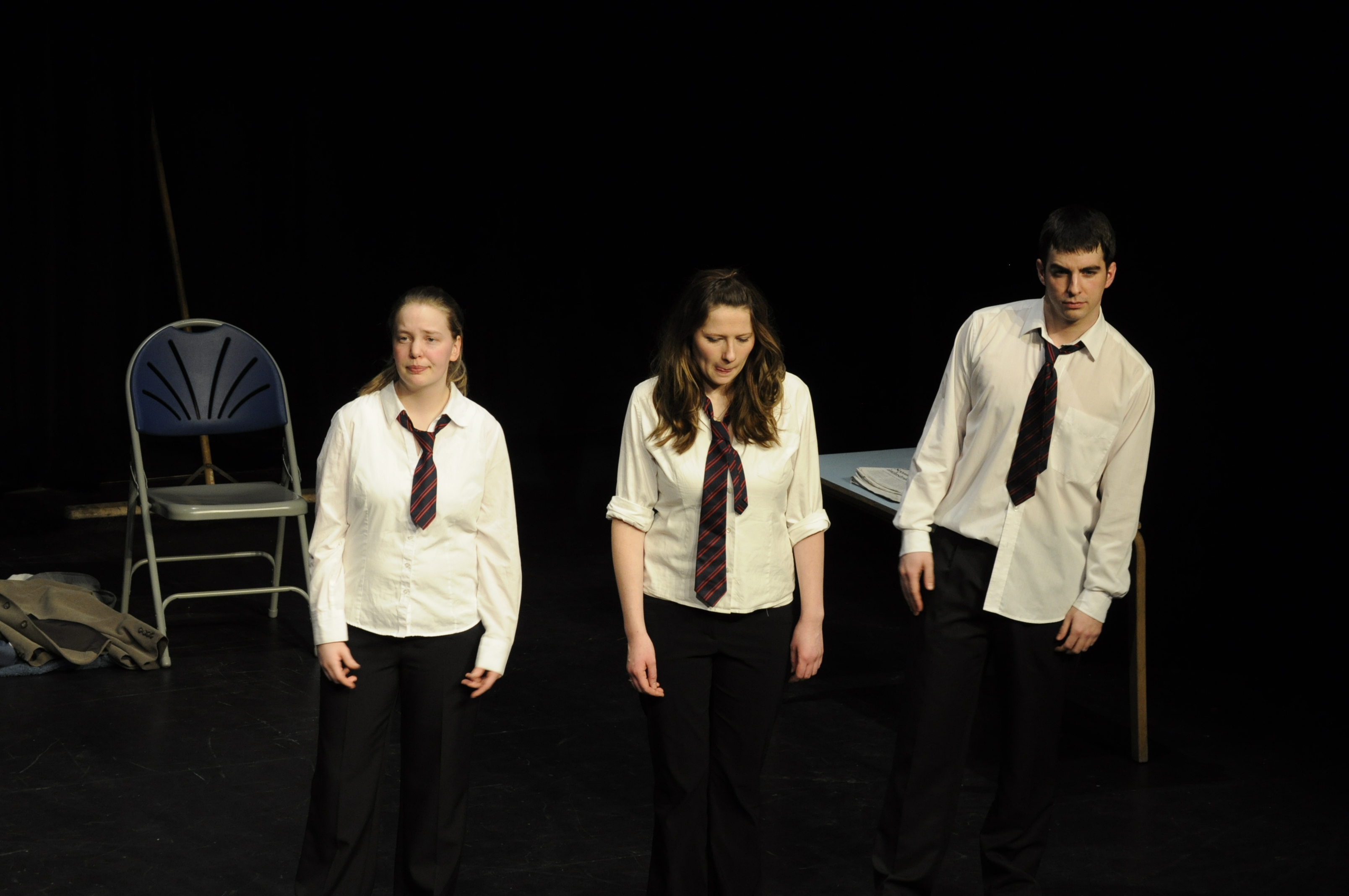 This is quite a feat, requiring much flexibility from the actors who seamlessly accommodate the differing accents and distinctive mannerism of the characters. The actors in this company for gap year students are all very young – the oldest being 22 – which makes their performances all the more admirable.

The characters they play are recognisable to all of us – the nervous teacher, the disciplinarian, the rotund theatrical, the smug PE teacher, the grumpy caretaker, the school bully and the kid who always gets told off.

Teechers is very funny and highly enjoyable to watch. Although conceived in 1985, its critique of the British education system is, sadly, still relevant today.”

“All three actors stay on stage for the whole play. Each takes on a numerous amount of characters – between five and nine, and has got every one to a tee, which just shows the diversity in their acting ability.

Hannah Brooks in particular shows great energy and proficiency as she jumps between characters within the blink of an eye. In the disco scene for example she plays five or six contrasting characters in the space of a few minutes. The choreographed fight is timed to perfection and the play’s serious educational messages are not forgotten. My congratulations go to everyone involved in the show. This play will make you laugh out loud, stun you into silence and feel for the realistic Salty, Gail and Hobby whose futures lie in the hands of politicians with “funny haircuts” who just aren’t bothered!” 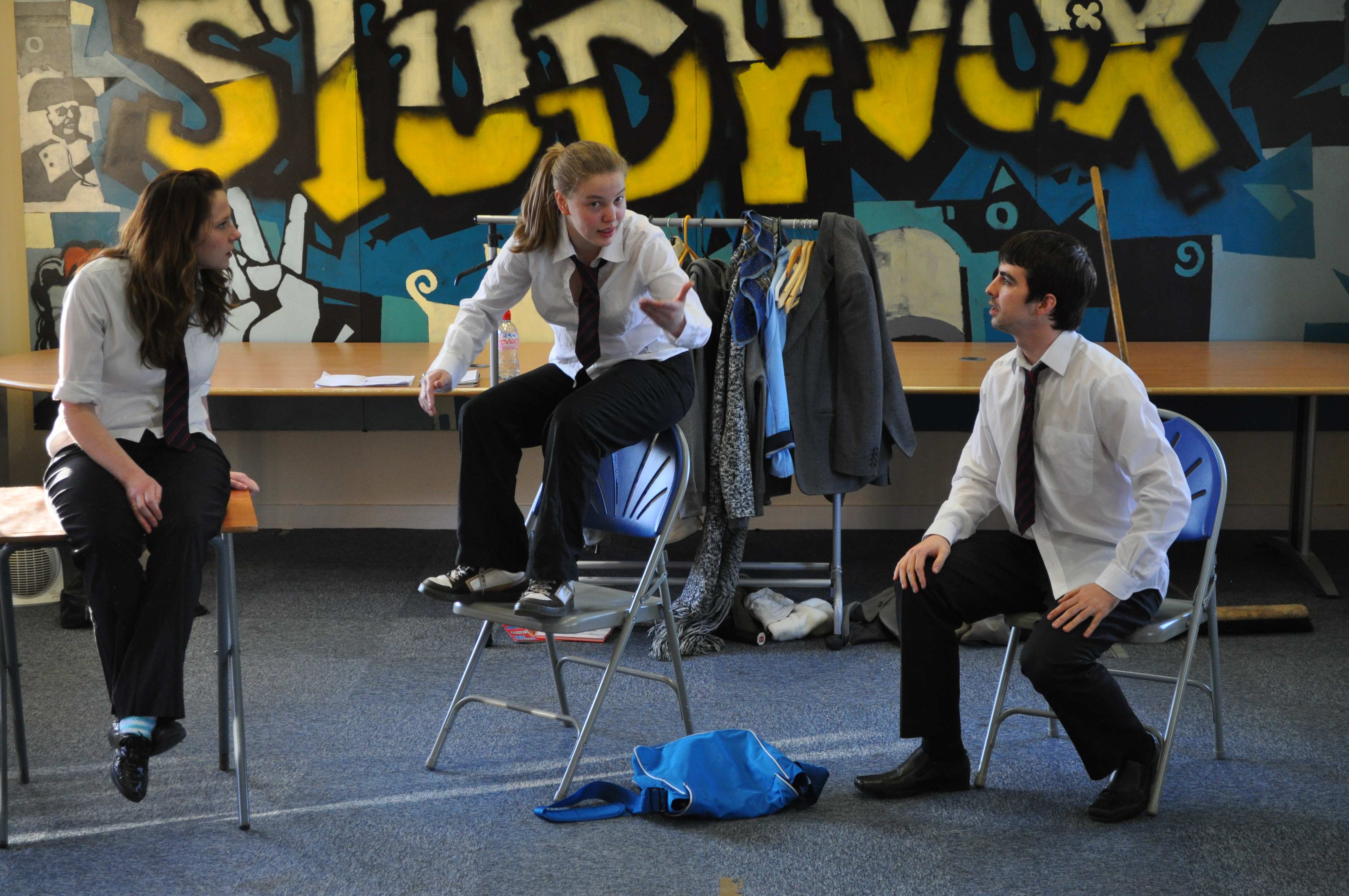 They have recruited an impressive trio in Henry Bays, Charlie Walsh and Hannah Brooks, who rise to the challenge of the fast-paced, physically demanding script with energy to burn and a self-assurance beyond their years. The rap and ninja scenes in particular were laugh-out-loud funny and performed with such brio they gave rise to impromptu ripples of applause in the audience. 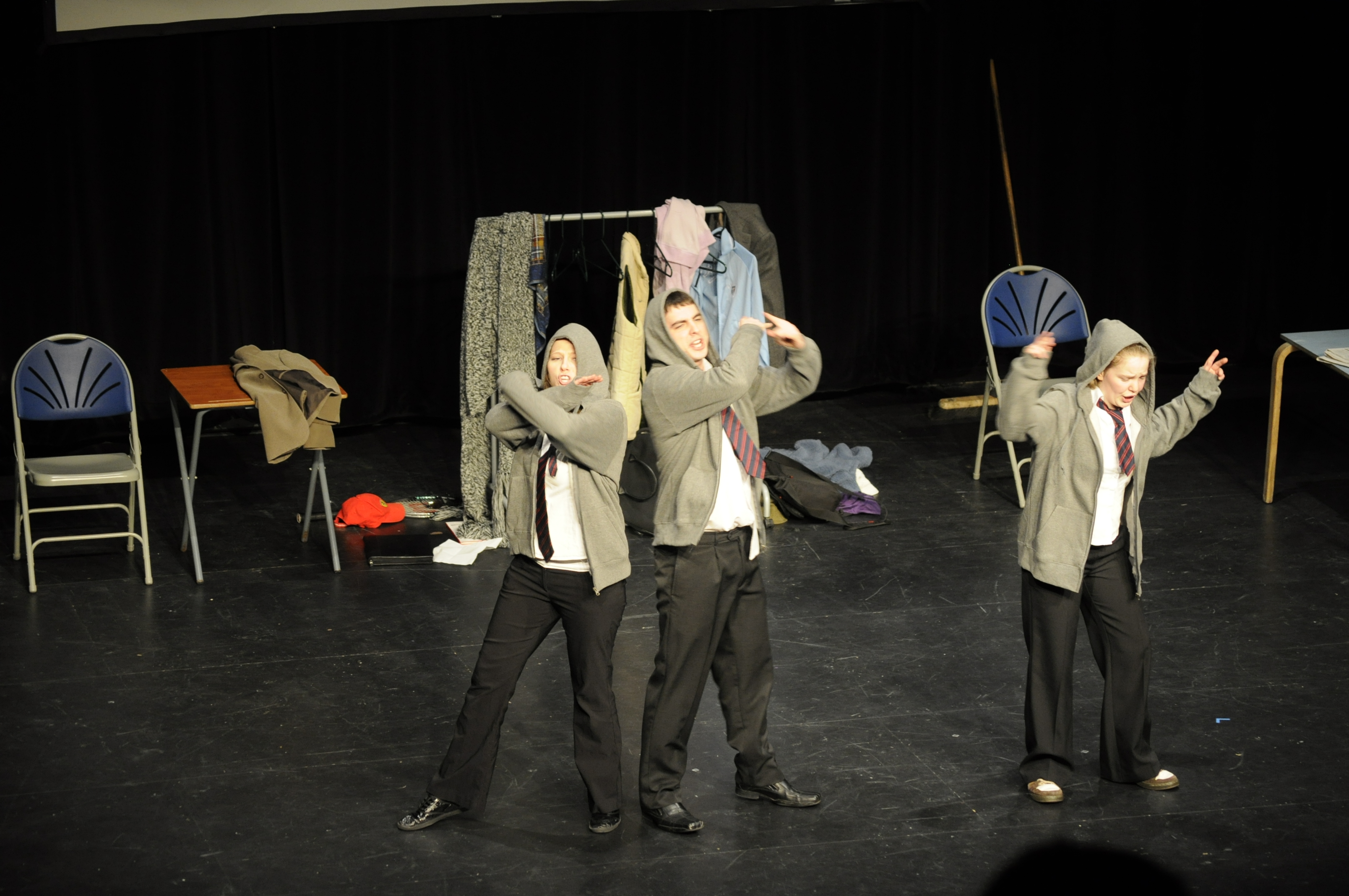 The action unfolds at breakneck speed, and each actor plays a variety of roles, which must be conveyed with only a minimum of costuming, lighting and props. It is greatly to the credit of director Amy Standish and the young cast that these character transitions feel neither awkward nor rushed, and we lose none of the wit and colour in the dialogue. Charlie Walsh in particular moves between playing an infatuated Gail, an overwrought Miss Whitham, and the cantankerous school caretaker, Doug, as well as myriad other roles, with humour and subtlety.

This is a production that breathes anarchic life into a play that has more than stood the test of time. Highly recommended.